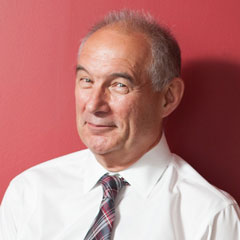 Founder and President of the Nogwog Fund

Randy Lewis is the Founder and President of the Nogwog Fund, an Illinois not-for-profit corporation. He is the author of No Greatness Without Goodness which was released in 2014 and was named by Fast Company as one of its “10 New Books You Need To Read This Year”.

In 2014 Mr. Lewis launched the Nogwog Disability Initiative to assist businesses and communities in developing and launching disability hiring initiatives that result in a more inclusive and effective workforce for business, improve the well-being of the community, and have a positive impact on all those involved, with and without disabilities. He has helped senior executives of companies across the country and abroad to launch their own disability hiring initiatives including Lowe’s, P&G, Best Buy, UPS, Marks & Spencer (UK), and Ica (Sweden).

Mr. Lewis pioneered this model at Walgreens where he served twenty years as the chain grew from 1,800 to 8,000 stores. When he retired in 2013, he had served sixteen years as Senior Vice President of Logistics and Supply Chain and was responsible for all aspects of logistics including strategy, operations, engineering, IT systems, and inventory management. The Walgreens supply chain is considered the most advanced logistics network in its industry composed
of one of the U.S.’s largest private transportation fleets and 19 automated distribution centers (DCs). During his tenure, Lewis directed the design and building of 13 of DCs and major expansions of the other six.

In 2004, he initiated a new generation of large-scale distribution centers like no others in the world. The objective was to incorporate the latest technologies and innovative management without incurring additional costs to employ large numbers of people with disabilities. The first of these opened in 2007 with the expectation that employees with disabilities would perform the same jobs, earn the same pay, and be held to the same performance standards as everyone else. The new DC exceeded all expectations, becoming the most productive and cost-effective in the company’s history. Over 30% of the workforce has a disability,
most of which had never been able to secure a steady job before. As a consequence of the success, over 1,000 people with disabilities were working in all Walgreens centers across the country within four years.

The work – acknowledged by the White House – has been called the “gold standard of disability employment” by the National Governors Association (NGA). In addition, Mr. Lewis has been called to testify before the Senate and speak at the United Nations. In 2012, he worked with Congressional leaders in both parties to organize and host a CEO Summit at its distribution center in Hartford, Connecticut. The meeting was attended by leaders of 15 major companies, many of which have subsequently launched their own disability hiring initiatives.

Mr. Lewis was recognized as Leader of the Year in 2011 by the Human Resources Management Association of Chicago for his body of work and outstanding service to and accomplishments in the field of human resources and business. His peers and DC Velocity magazine recognized him for his contribution to the logistics profession in 2008. He received South Carolina’s highest award to non-citizens – the Order of the Silver Crescent – in 2008 for his leadership and contribution to the well-being of its citizenry.

Mr. Lewis served on the Board of Directors of Wendy’s from 2004 to 2015. With Wendy’s spin-off of Tim Hortons in 2006, he was selected to serve on the Board of Directors of Tim Hortons as chairman of its Compensation Committee in addition to his duties at Wendy’s. When Wendy’s came under increased activist shareholder pressure and it was determined that serving on both Boards could eventually result in a conflict of interest, Mr. Lewis resigned from the Tim Hortons Board. When Wendy’s was acquired by Arby’s in 2008, Mr. Lewis was selected by the Wendy’s Board as one of two legacy directors to join the combined companies’ Board where he has served on its Compensation, Audit, Benefits & Investments, and Governance Committees.

Prior to joining Walgreens in 1992, Mr. Lewis worked for seventeen years as a management consultant beginning in the Consulting Division of Arthur Andersen (Accenture) and ending as a Partner at Ernst & Young (E&Y). As a consultant, he advised companies in a variety of industries including advertising, manufacturing, distribution, retail, and energy. Specific assignments include the development of the financial control systems for the trans-Arabian pipeline in Saudi Arabia and the creation of the cost management/production planning systems for Argentina’s largest private steel manufacturer.

Throughout his career, Mr. Lewis has worked to live out his belief that excellence, people, and community are the cornerstones of effective business leadership. In addition to his ongoing work in disability employment advocacy, he is often called to speak on leadership at business events and universities and has been a recurring lecturer at Booth School of Business (UofChicago) for the past ten years. Mr. Lewis lives with his family near Chicago.